I have started to add links to the left hand column of this web page. The first are other (but not all) web sites I currently publish. They contain my personal interests. Those interests are fairly broad but are mostly hobby activities.

The next block contains links to amateur radio clubs where I have been active. I will add links to other non-commercial ham radio sites. You might argue the ARRL is commercial but I make the decisions around here. Ha!

The next block down is definitely links with a commercial intent. Tons of good free info but they also sell stuff we need. If I haven't bought from them myself, I have seen enough reference to them to think they are reliable. Some are small cottage type operations, much like what I do. But always – Caveat Emptor, I make no endorsement by listing here.

Some of the sites including my own are rather old. Unfortunately the ones I don't manage contain substantial amounts of broken links. That is always a risk when linking to material and websites where the publisher has no control. It is almost impossible to constantly police large sites and make sure everything keeps working. Commercial sites pay a staff to police content for bad links or simply just don't link to information they don't control.

Hobbyist and very small business just do their thing sharing information. Some sites are obviously non professional so we cut them some slack on maintenance. I am pleased they share and they are a valuable resource.

If this website ever goes commercial, like I offer to sell something, I will have a commercial policy page on site. I have a page that states everything I post on site is for informational use only. I don't represent myself as and expert or perfect.

The links will be added to or deleted and more categories added. I may even change locations on pages. Let me know when you find something broken. Just be nice… <grin>

Doing As I Say 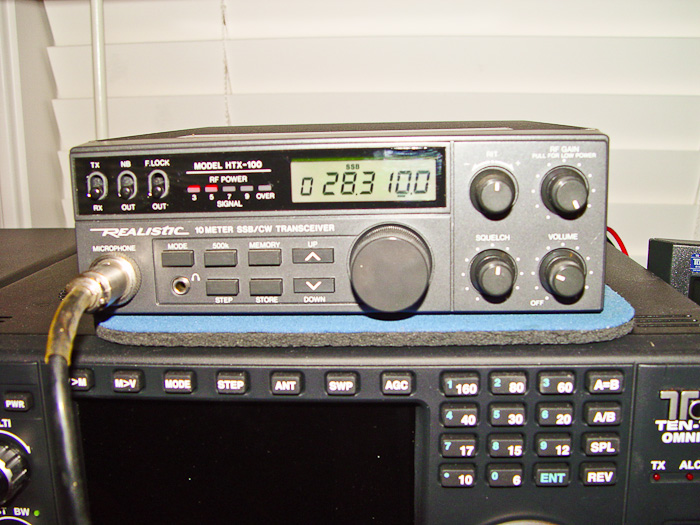 I have done some checking and this weekend I plan to have the basic converter ordered that will allow me to get to a 144 MHz 2nd IF conversion from 28 MHz first stage transceiver. I don't have an all mode 2M transceiver. (More about that.) What I presently own is a HTX-100 10 meter only transceiver shown here on top of my Omni VII. It is one option I could use. What I definately need to get is a converter up to a low level 2 meter IF.

I have studied some of the super stable oscillators with rubidium and GPS locks mentioned in the previous post. I may get there with a bench standard or home station. The local ops and my friend KB8VAO in Ohio don't go to that extreme for portable operation, or need to... Neither do I for now. I will probably build an IsoTemp 10 MHz TCXO and plan on a compensated (GPS?) version later.

A high stability 10 MHz standard is required to feed converters to get to the microwave bands. My plan is to use the single standard to also stabilize the first stage equipment.

I now have obtained a FLEX-1500 SDR (Software Defined Radio) front end with the superior software display of all signals in a wide bandwidth. Inaudible signals can be seen in the displays. SDRs do this with ease but are only designed for HF  through 6 meters (1.8 - 54 Mhz.) I need to find a suitable laptop before I can use the SDR in rover operation. I have just ordered a Down East Microwave L144-28IAC coverter.

So far this has been all talk and no show. Blogging it here will motivate my taking action! Ha!

Looking ahead, my next step will be building a 10 MHz standard for portable operation. Many more options there. Ahhh… I love the design engineering part and getting the plan to come together, my way.

I've taken a high interest in building and operating a station in the microwave bands. So I have been doing a lot of reading research on what it takes to make that happen. One critical requirement is obtaining the desired amount of frequency stability in the microwave frequencies.

As it turns out there are two approaches meaning two totally separate practices. Neither being right or wrong. It all depends on the desired form of communications. They are labeled broadband and narrow band.

Broad band is the most tolerant of frequency variations such as drifting and fluctuations. Those conditions are never desired but can be lived with, with less critical and expensive equipment design. For casual line of sight ham operations, broad band equipment is widely used.

For critical operations such as contesting, DX, moon bounce, meteor scatter and all weak signal work, very stable and accurate frequency control is required. Also the operator needs to know exactly what frequency on which he/she is operating.

So for me it looks like project number one is to build a very stable frequency standard. 10 MHz is the usual base standard. Short term accuracies in the range of 5x10-12 can be obtained with some methods. That's 0.000000000005 percent!